Newest Research Into How Dogs See

Humans and dogs have been buddies ever since the domestication of the species, some tens of thousands of years ago.

Nowadays, nearly half of American households have dogs as their pets and our affection towards these pets seems never-ending. And a big chunk of those dog owners have the beloved German Shepherd. On top of that – German Shepherds make a majority of police force dogs and service dogs. That’s why the question of how we can work with these animals is so crucial. Knowing their physical capabilities is paramount and sight is among the most important things here. Despite this amazing bond between us and our dogs, there are a lot of misconceptions and myths about dogs that we can’t shake off. One of these is that dogs see the world in black and white! Perpetuated by vets, scientists, pop culture (like movies and cartoons) and simply common knowledge, this belief is most certainly a myth. Thanks to the newest research in this area we can now debunk this myth once and for all.

Domestic dogs have been bred for hundreds of years to develop certain traits and capabilities.

This is why different breeds of dogs might have different sensory capabilities. Some were bred to be hunters, so, naturally, their ability to see better in tall grass or mixed terrain will be much more developed than in those dogs that were bred just to look cute.

According to latest research results – dogs do, in fact, see color. It’s just that they don’t see as much color as we do. The photoreceptor cells that are responsible for the perception of color are much less developed in dogs, compared to humans. Dogs possess only about 20% of the color range we do. The specifics of their vision are yet to be discovered, with some scientists suggesting that dogs vision is basically variations of yellow, blue and gray. That’s not enough to really appreciate most of art, television or nature, but it’s certainly enough for most of the dogs to still have a good time!

Dogs’ vision is sometimes compared to that of a colorblind person.

Most common human colorblindness appears when a person is missing one type of the photoreceptor cone cells out of three that people usually have. This is the situation with dogs that have only two cone cells types in their eyes. And you can see that most people experience little or no trouble with this condition, same goes for dogs, too. Judging by their happy-go-lucky type of attitude, it’s safe to say that dogs don’t really mind not seeing all the colors of the sunset.

Dogs also have a lesser visual acuity than we do. It’s around 20-40% of ours, and what it means is that our pets are much more likely to see objects as blurry from a distance. So don’t blame your dog when they can’t find the ball! Maybe it’s too far and has a weird greyish-blue color, (much like most other objects for a dog).

The good news for dogs is, of course, the fact that they compensate the lack of vision with other senses.

Dog’s sense of smell is incredibly developed, enabling them not only to sense food nearby but also to distinguish each other as well as people. Don’t worry if they can’t see you – they still know all too well where you are.

Credit: http://www.reddit.com/ Here is the fourth article in what I call my… 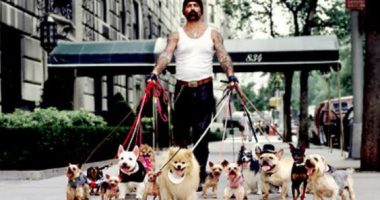 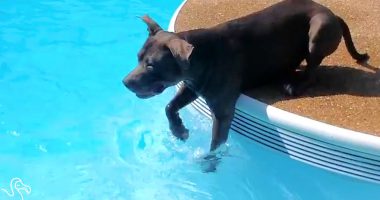 BEST PLACES FOR YOUR PITBULL TO SWIM The summer is almost over, but… 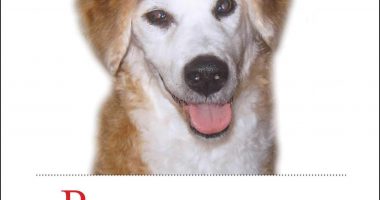