The Walking Dead: The Other Sides Of Jerry

An unlikely character emerged as a fan favorite in the second episode of The Walking Dead‘s new season. No, not King Ezekiel or his tiger, Shiva. We’re talking about Ezekiel’s right-hand man, Jerry. He’s a big, jovial man, but there is surely a reason Ezekiel keeps him by his side at all times.

Cooper Andrews is the actor who plays Jerry. He has a few acting credit under his belt, including a recurring role on AMC’s Halt and Catch Fire. But Andrews is more well-known for his behind-the-scenes work as a camera operator, including on The Walking Dead. It turns out his ability to be both happy and threatening is what drew producers to him.

From Audition to Filming in No Time

“I got a call from my manager and said that [The Walking Dead showrunner] Scott Gimple wanted me to read for this character named Lester, and I was like, ‘Okay, that’s an interesting name,’” said Andrews. “They said he was like this zen-like guy with this toughness around him. I’m reading the dialogue and the lines that they gave me, but it felt like a crime boss of some kind, and I was telling the dog, Santiago, to hush it up or chill it up. It was so funny because I’m like, ‘Is this The Walking Dead? What is this dialogue? Is this The Walking Dead?’

“I did a version, and then he came back and said, ‘Let’s try one a different way,’ so I gave him four different versions and then that was all Friday, Saturday. Then I was like, ‘Well, I don’t know what just happened, but I’ll just keep moving on.’ I was shooting a fight sequence with my friends. My roommates are stunt guys, and they’re working. I’m in the swimming pool with the camera, and I get a phone call, and they said ‘They need you on an airplane to get to Atlanta today.’ I was like, ‘What?’ I was in a pool shooting this thing, and I’m rambling, I’m sorry. I went, ‘Okay, cool.’

“I go fly out, and the next day I’m doing the table read with everybody. Then after, we’re shooting.”

Even after trying out multiple versions in his audition, Andrews still didn’t have Jerry figured out — yet. “I did the table read, and I played it like this tough Biggie Smalls type way of doing it,” said Andrews. “I wasn’t feeling it. I had a Skype conversation that night with Scott, and he was like, ‘What are you thinking? The reason I picked you is you have this smile that when you smile, you seem really happy, but when you’re not smiling, you seem really dangerous.’ I was like, ‘Thank you.’

“He goes, ‘How do you feel if we play it a little more of that. So you’re in the Kingdom. You’re this happy guy, and then maybe when you’re out where there are walkers, we’ll just make you this f—ing bad ass.’ I was like, ‘Yes. I’m all for that.’

We haven’t seen much of Jerry-the-bad-ass yet. So far, we’ve seen him hilariously offering fruit and accompanying Ezekiel around The Kingdom. It’ll be exciting to see a new side to Jerry when he and Ezekiel return later in the season. 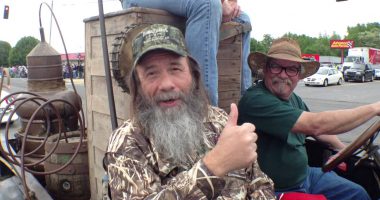