Producer Gale Anne Hurd has had a long and storied history in Hollywood. She was married to director James Cameron from 1985-1989. She was also a producer on his films The Terminator, Aliens, The Abyss, and Terminator 2: Judgement Day. One of her most successful current projects, of course, is AMC’s The Walking Dead.

With Season 7 just beginning, Hurd talked to the Atlanta Journal-Constitution about what to expect.

“I have to say, when reading the comic book, Jeffrey Dean Morgan came to mind. But he’s never available. He’s such a well-respected actor who is always working. He was always perfect casting. We never thought we’d be able to get him. It really was perfect when he said he was a fan and wanted to do this.”

“First of all, he’s a larger-than-life actor. He’s tall. And he’s got that amazing charisma that Negan has to have. He’s the most formidable villain in The Walking Dead comic book but he’s also incredibly charming. And he’s got more monologues than any other dialogue in the comic book. And Jeffrey can just do it easily. From his first day on the set, he’s been an absolute joy. When casting such an important role for a character who will be around awhile, you want someone who is going to fit in with the people who have been there. He literally fits the bill across the board and you can tell he relishes it. He was one of the great blessings of this season.”

Whether you hate Negan or not, there’s no arguing that Rick’s group did kill members of the Saviors in cold blood. “That’s the remarkable thing about the show. We’re so with our characters at this point that even when they kill other people in cold blood, they’re still heroes,” said Hurd. “We can justify their behavior. If you stand back and look at it from Negan’s perspective or objective, they were the aggressors here. And that’s part of the whole wonderful discussion of the show. Look where our characters have gotten to. We’ve seen characters like Glenn rebel against hits. It doesn’t go with their ethos. Yet you also have people saying, ‘Look, when the rules change, you have to change with them.’ It’s humanism vs. pragmatism. You can argue it from both sides.”

The Exodus of Carol

Hurd even explained Carol’s decision to leave the group. “I think she had become a person she didn’t recognize coming from an abused wife background the way that she did. At what point had she crossed the line and become more like [her dead abusive husband] Ed than Carol? She was the mother protecting her child. She was capable of protecting herself as opposed to forced to kill other people. She thought in Alexandria, they could start over and get things right. But it’s a world that’s very unforgiving. That kind of utopia will be challenged. Everyone wants a piece of it. Those are people who take what they want. They’re not people who will negotiate peacefully or fairly.”

Of course, one of the biggest questions is how The Walking Dead manages to keep its secrets. In a world of constant leaks and spoilers, how can you keep a cliffhanger ending for six months. Hurd say, “After six years, we’ve learned it can be hard for new people who just joined the show because you can’t even tell your friends and family. That’s the hardest part. You come home from work, you literally have to zip your lip. You can’t leave scripts lying around. Then again, we’ve eliminated paper. We generally read everything now on devices.” 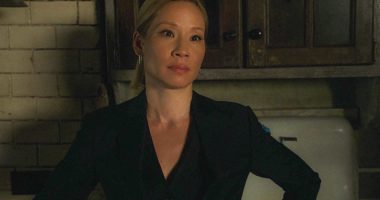 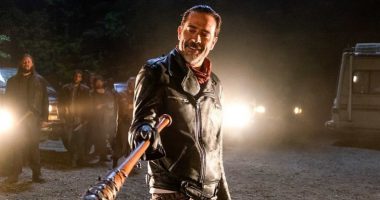 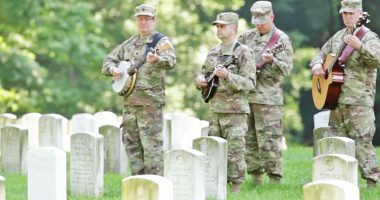