The Master Cleanse Has Its ScreamFest Premiere

The encounters and bonds people experience throughout their lives often times form and shape their ideals. People often hold deeply onto the personal baggage that has informed their current personalities as a comfortable and familiar security measure. It is these distinct experiences and connections that are present in the new horror movie, The Master Cleanse. The film celebrated its Los Angeles premiere last Saturday, October 22 at the Screamfest Horror Film Festival.

The fantasy movie’s L.A. premiere at the TCL Chinese Theatre took place after it had its world premiere earlier this year at South by Southwest (SXSW). In attendance at The Master Cleanse, ScreamFest screening, were actor-executive producer Johnny Galecki and filmmaker Bobby Miller. Miller made his feature film writing and directorial debuts on the comedy-drama. Other special guests at the screening included actors Chris Hardwick and Ben Feldman.

The Master Cleanse follows Paul (Galecki) after his bride-to-be doesn’t show up to her own wedding. Now, Paul is content to wander through life without a clear sense of purpose. Paul’s outlook on life suddenly changes after he sees a television commercial that advertises a spiritual retreat in the mountains. He hopes that the retreat can deliver on its promise to inspire his renewal and visits the website to find more information.

After following the website’s cryptic instructions, Paul finds himself in an isolated corporate office along with others who are in similar emotional situations. In order to be able to go on the retreat, they must discuss their deep emotional pain on camera. This also serves as an audition reel for the retreat. Paul captures the attention of the retreat’s officials and soon he is off into the mountains with a group of individuals. The group is then introduced to their whimsical guide, Lily (Anjelica Huston).

Now, I can tell my fiancé I know what Anjelica Huston has been up to! We watched The Addams Family, the Witches, and Ever After recently and my fiancé asked about her. He’s a big fan. But I digress.

The Master Cleanse is one of the first projects to be put out by Galecki’s new production company. Galecki opened the doors to his Warner Bros. based production label, Alcide Bava Productions, which will develop TV series and feature films.

You can head over to the film’s website. There you can find several press interviews, reviews, and some photography. The reviews may contain spoilers, so proceed with caution. Social media accounts for the film are also listed. The Master Cleanse has a Twitter, Facebook, and Instagram.

The website itself is pretty basic. There are no flashy graphics to scare you, it’s all pretty straightforward information. Galecki seems to be going for a more artsy type of horror flick. If you want more information on the film, check out the social media links and the press releases. Note that the press releases are in a downloadable PDF format. 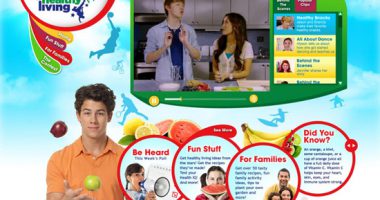 A new series of short videos will air on Disney Channel, Disney Junior, and Disney XD to promote healthy eating and the benefits of exercise.
Next week on The Walking Dead, Carol and Morgan enter the mysterious community called The Kingdom and meet King Ezekiel, along with his tiger, Shiva!
The cast and crew of The Walking Dead have come to Atlanta this Halloween weekend for Walker Stalker Con, and they’re taking the stage to talk.